Fall is my favorite time of year, even though the turning and falling leaves hints at the winter to come. It is also the beginning of the end of the year. And yet, this year, when summer wouldn't end, until it did, fall weather never made it. We've gone right into winter weather that requires the heater being on in the house; temps will plummet when the first arctic blast moves south across the United States by tomorrow. And yet, fall is my favorite time of the year when I want to write and think and read and snuggle down into my house. 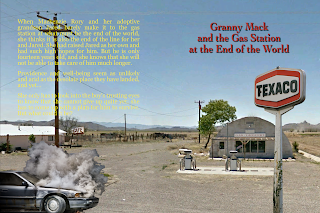 I've been on the phone with Cliff in the last couple of days, sharing our ideas on my next writing project, which I finally got around to starting. I usually start with a concept and then I flesh out the ideas as it takes shape as I write. This new book is one of the spin-off novels I've been thinking about from the Common Threads in the Life Series, titled Granny Mack and the Gas Station at the End of the World, Cliff has outlined Part One of the three parts that will be in this book, and once I finish the Prologue, I have some initial research to do all the way back to the 1920's, 30's, 40's, and 50's. Granny Mack made an appearance in Book 5 of the Common Threads series, and since then I've been wanting to create a book around her life story. Stay tuned, I am tentatively setting a time line for sometime in 2020 for this book.

Some of the other writers in the writers group have accomplished projects and here in Columbus, a rather literary city in the Mississippi writers tradition, I attended the first book signing for Jeannette Basson from the group. It was held at the Columbus Arts Council building on the corner of Main and 5 St. from Noon to 2 p.m. Stranded in Alaska is Jeannette's first book, and while she's spending a lot of time promoting her book, she is also keeping her mind on her next book, Thunder Over Missouri. Like Stranded the new book will center around strong female characters, and I look forward to getting snippets of her new work at the Writers Group. The Arts Council building was buzzing with activity, not only for those who came to hear Jeannette read and sign books, but also those who usually drop by whenever there is a new art display on hand. The book signing was a success as people came and went during the two hours. At around  1 p.m. people gathered for her reading. The audience found both humor and suspense in Jeannette's reading, from the Moose that ate the main character's clothes while she was bathing in an inlet of the river near her camp, to returning home and keeping an eye out for the various threats the  Alaskan wilderness posed.  A lively period of Q and A followed her reading.

Dottie Porter's book, which she finished and published about a month after Jeannette's book came out, is now available, and we hope that we will get a reading from her in the weeks to come. Dottie's book is titled Out from under the Bed Pan into Cyberspace Nursing, which chronicles Dottie's sixty-year career as a Nurse and healer. She now works with women in the jail system in Columbus and doesn't seem to be slowing down even though she is in her 80s.

But just like Jeannette, Dottie is not stopping at this one book. She has promised me that she is already hard at work on her next project. I will continue to urge writers in the group to follow the pioneering lead of Jeannette Basson and Dottie Porter in finally finishing their books. We have a few more truly aspiring authors in the writers group, and now that it's Fall, it is a good time to get some of those more sedate activities into high gear.

As usual, I try to include a video about Columbus or Mississippi. Year round, and not just the fall or spring, there is always something to do in Mississippi.